The Lofoten Islands are fantastic little islands above the Artic Polar circle, in the north of Norway.
Arriving by boat from the mainland, The Lofoten Island stand as majestic steep peaks that drop into the sea.
What impressed me immediately, beyond the almost surreal beauty, is the unchallenged domination of mother nature; it is a magical place !!!
Riding powder in steep couloirs that drop directly into the green sea, breathing fresh salty air, massive eagles swooping overhead, hundreds of seagulls sqwawking everywhere….Welcome to Lofoten. This is quite far removed from the norm for me but the emotions that these new elements gave me will be forever imprinted on my soul.

I went there to meet my friend Paul, my companion for the Pakistan trip in June and to look for some radical lines. I found much more; wild nature, breathtaking scenery, peaceful, sleepy villages with multicoloured houses that looked like something straight from a fairytale. And what I discovered most of all was super hospitable and genuine people.

Everyone seems to be happy about life, no one locks their cars and houses and stress seems to be something other Europeans suffer from, but not here..

By the way, it does take time to adjust to this chilled vibe, especially if you are a rider looking for some epic lines and the weather is playing havoc with your nerves, changing 20 times in per hour – “four seasons in a day” as the saying goes.

The weather was in charge for the first 4 days. It was like a Norwegian peep show… revealing some gnarly lines in a clear window and then hiding them again minutes later. Teasing you with some powder, opening up and then closing again when you are at the top of the line.

I arrived in the night of Monday 2nd April after almost 2 days travelling from Chamonix via Italy.
Lofoten is not so easy to reach, with especially difficult connections and transports organisations who dont seem too hot on linking up this place with the rest of Norway.
Riding lines here are not big like in the Alps, the mountains are 500 to 1100m high, but there is some incredibly steep terrain starting at sea level, this allows you to climb and ski a couple of lines in a day.

Basically the first few days I had been riding in the morning, eating the beautiful food of Biorg, Angelita’s mother (Paul’s girlfriend), resting, visiting and riding again in the evening.
Paul brought me on the Stornappstind, a 752 m mountain behind the house the first day but as soon we arrived at the summit it started snowing with strong wind and no visibility.
After one hour of waiting in super strong blizzard we had to abandon the idea of riding the south couloir (of which we couldn’t even find the entry) and we went down the west face, having my first faceshots above the polar arctic circle.

In the afternoon I went exploring alone, touring whilst it snowed… it was magic.

The Stornappstind with its beatiful south couloir on the right

The south Couloir, we rode it on our 2nd attempt

The view from the kitchen window

What I really loved about Lofoten is the sense of the isolation you have. It feels like you are away from the world, there are no skiers around, you just drive around, pick up the line calling you the most, climb it and ski it, always with a great sense of adventure.

Badass Fishermen…Angel on the right

Most of the lines haven’t probably been skied before, there is no public information and Norwegians don’t seem pretty keen to go where they think nobody has been before. The weather and snow are different from what I’m used to and this required an higher level of concentration and interpretation of signs and feelings.

Most of the places we rode were pretty remote, no rescue, no help, every mistake or unexpected happening might have had pretty dramatic consequences.

We quickly realized that, Paul and I, on the third day when we attempted the Presten couloir, near Henningsvaer. Different than in the area where we had been riding the previous days, here the last fresh snow fall was too light and on the way up we were touching the old crust under 30-40cm of fresh.

The crux, a rocky-icy step in the middle was not a big problem but above that in the second sustained steep part of the couloir the fresh snow was shallow.

That’s awesome, you just park the car and start climbing

Our goal in the background

Paul was not so keen to continue, me I felt to give it a try, you never know what is happening the next few meters, snow can always change and in the worse case we can downclimb I thought.
Higher up in fact was much better but at less than 50 meters from the top, Paul was opening the track on the 50° steepest part of the couloir and noticed a drastic change in the snow layer.
Just the time to realize that and making one more step that we heard “woooooooooommmm”
I heard him scream and lifted my head up to see his big body and a layer of 30 cm thick snow coming my way.

I tried hard to anchor my body with the ice axes but as soon as the snow hit me I was washed away.

I remember the speed my body was flying down the couloir with the axes and crampons trying to grip and feeling like a cat on the window. Suddenly my crampons gripped and I performed one of my favourite trick: the backflip 🙂

Tumbling I tried to push my body on the left where the couloir is wider.
I managed it and the snow was deeper there helping me to lose speed while all the huge sluff disappeared roaring over the rocky icy step below.
The first feeling was a tremendous pain in my elbow, I thought to have broken it hiting a rock or the board. I heard Paul calling me, thankfully he had managed to stop 50m above.
I had lost my head camera and an axe but I could have lost alot more.

Paul came down to me, gave me some painkillers and we started to downclimb to the crux.
The weather changed within 5 minutes again, the wind came in and there was sluff coming down from everyside of the mountain spraying us. I felt like I was in a trap with the mountain trying to spit me out saying “go away little creature”.
Half an hour before I felt like I was in paradise whilst now I was struggling in hell.

The ride down to the road was in deep and great snow.
It was dumping so big that we couldn’t see the road and it took us ages to get back home. Crossing long wild and uninhabited areas in the storm was pretty hardcore!

The next day it kept dumping all day long, we went for an easy mellow tour in the storm; nature is so wild and strong that it is magical to be out there on your own or with your friends.
And what is even more magical is to arrive back home and have a lovely Norwegian mum cooking for you and filling your belly with all the best healthy food you can imagine; for the first time in my life I spent one week without shaking for lack of pasta; takk for maten Biorg 😉

Finally it stopped snowing and the sun came out, letting me see Lofoten island in all its breathtaking beauty.
There was over half meter of fresh snow on the mountains so we went fishing with Angel to let the snow settle down.
It was an amazing experience, we fished the biggest cods, and spotted some of the most incredible lines I have ever seen. A boat is a great way to access most of the remote runs around here.

In the afternoon I went on my own to ride a line that had caught my attention. Being at the top of the peak alone at 7pm with the sun setting was another one of those moments I won’t forget.
The snow was great, I rode the line in few seconds.
What I like the most is ending up the riding in front of the sea, with the noise of the little waves crashing on the rocks and the cries of the seagulls: it makes me feel extremely alive and at peace.

On the summit alone at sunset…magic!

The day before my final day, riding wise, was the best in terms of satisfaction for me.

Attempting the previous day line on an isolated mountain with an unpronounceable name (we had turned back after 100m as the surface layer was lying on big marbles, not exactly the most appealing situation) I spotted a hidden couloir north facing on the Stornappstind.
At the top of the couloir there were massive cornices and it was out of the question that we could climb it.
I found an alternative climbing line on the left that looked out of objective dangers and I was pretty motivated to go the following day, Angelita’s young Norwegian friend joined me the next morning.

The way up in green, the ride down in red

I quickly climbed an aesthetic 250 m couloir to check the snow conditions and have a better look at the top part of the big hidden couloir.
I stopped for a few minutes to rest at the top, surrounded by an extreme silence and following with my eyes a big eagle flying around, I felt completely light and free.
The first part of the couloir was pretty steep and after the first meters the snow was perfect. I was now ready to give the big one a try.

The warm up couloir 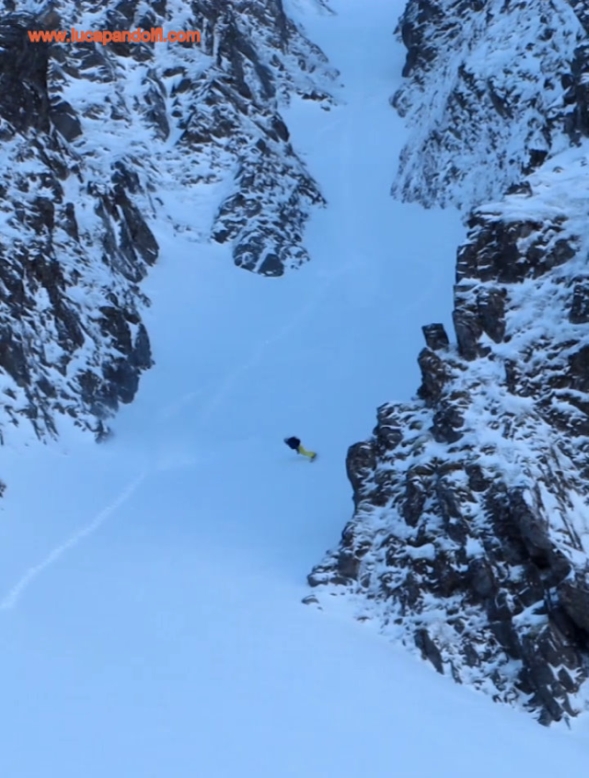 Despite the climbing line being more steep, icy and exposed than what I had thought, we managed to join the couloir at the height of the cornices and exit safely to the top.
It was the first day we’d had a completely blue sky and the view from there was breathtaking. The first 40m were pretty icy, we downclimbed a bit before reach the perfect deep snow.

I flashed this beautiful 650m 45° couloir with a couple of 50° sections and a nice little drop in the middle, followed by the euphoric Norwegian skier (it was his first experience on something like that, he did really well and I’m glad to have opened a new door for him).

Once again straight down to the sea with the seagulls welcoming us.

This was my favourite wild and peacefull corner of Lofoten, here I felt my soul was in peace and I will miss it a lot.

My last night in Lofoten brought me a totally breathtaking and unexpected gift, the northern lights!!!
I’d forgotten my gloves and my hands froze trying to get the right camera setting to catch this unique nature show but it was worth it, it was simply magic!

My trip to Lofoten finished with a night swimming in the pool, hot tub and sauna on the bridge of my connection boat.

From Bodo I flew back to Oslo to join Paul and Angelita at their house where I spent a couple of days kayaking around the fiord, the little islands and visiting the town, waiting for my flight back.

It’s dumping in Chamonix, it is time to go back!

I wanna thank my friend Paul, his girlfriend Angelita and her lovely family for the great time and food, also to everyone I met on my way that made this trip unforgettable.